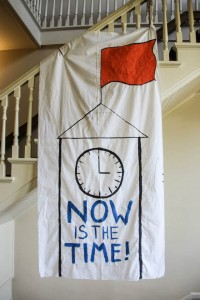 Why does divestment work as a tactic in the broader movement to address climate change?

Divestment itself cannot mitigate climate change if undertaken in a vacuum. Institutional and individual divestment from fossil fuel helps create social space, political will and economic incentive for other action and policies that will bring about a clean energy society capable of functioning within the planet’s natural limits. In other words, it is both a moral and economic action that helps reverse the powerful inertia of a system we know is rapidly and malignantly transforming the planet. A growing international divestment movement is well underway and promises to promote systemic change similar to the 1980s South African apartheid divestment movement and the more recent anti-tobacco campaign.

But here’s my bet: the kids are going to win, and when they do, it’s going to matter. In fact, with Washington blocked, campuses are suddenly a front line in the climate fight – a place to stand up to a status quo that is wrecking the planet. >> The Case for Fossil-Fuel Divestment | Bill McKibben | The Rolling Stone | 22 February 2013

The usual rule of newspaper campaigns is that you don’t start one unless you know you’re going to win it. This one will almost certainly be won in time: the physics is unarguable. This is why the divestment movement has changed from being a fringe campaign to something every responsible fund manager can no longer ignore.  >> The argument for divesting from fossil fuels is becoming overwhelming | The Guardian | 16 March 2015

Divestment aims to stigmatize the fossil fuel industry; to spark dialogue about its role in polluting politics, harming communities and driving the climate crisis; and to build a powerful, organized climate movement. >> Why Divestment Can Be Successful | The New York Times | 14 May | 2014

Our planet, and the life that has adapted to the relatively stable climatic conditions of the last 10,000 years, cannot handle a 4°C rise in global average temperatures. This is best illustrated by the way that Arctic ice melt is already drastically outpacing glaciologists’ models, which suggests that prior estimates of the sensitivity of our planet to a changing climate may be too conservative. >> The Overwhelming Case for Divestment | Aaron Karp, UMass Fossil Fuel Divestment Campaign